Eliza W. Farnham was a woman who did not just advocate for reform and help to the poor and dispossessed. She lived her beliefs – vigorously. Born in 1815 in Rensselaerville, New York, she spent part of her life in Illinois and was living in California at the outbreak of the Civil War. A freethinker, she advocated for prison reform, serving for a time in the 1840’s as the matron of the women’s section of Sing Sing Prison, and she boldly waded into the controversial arena of women’s rights and the abolition of slavery. In 1859 she addressed the National Women’s Rights Convention in New York City, and in 1863, working with the Women’s Loyal National League, she appealed to Congress for a constitutional amendment to abolish slavery. In her busy life she found time to write five books, of which her most prominent was A Woman and Her Era, published in 1864. In it, she did not argue for equal rights between the sexes, instead she contended that women were superior to men and that they played the crucial role in the moral and spiritual elevation of society. Whatever cause she took up, Eliza was a force to be reckoned with. As one of her contemporaries described her, “She has nerves alone to explore the seven circles of Dante’s Hell.”
In July 1863, while in Philadelphia for a speaking engagement (she had returned to from California in late 1862 and was living in New York), Eliza learned of the desperate need for volunteer nurses at Gettysburg. She left at once and arrived in Gettysburg on the evening of July 6. The following evening, July 7, after a full day in Gettysburg she took time to write of her experiences to an old friend in Santa Cruz, California. The letter was published in a journal titled Common Sense (if any readers can find further information about this I would like to hear from you) on August 22, 1874. To my knowledge, it has not appeared since. A copy of the single page from the journal with Eliza’s letter was donated to the Gettysburg NMP library nearly twenty years ago. I thought for this Women’s History Month that it was fitting we should hear from Eliza again.

July 7 – Evening
Let me tell you, dear, how I have spent this day. It will be, most probably, a fair history of what will follow for three weeks, or a month, if I can stand it so long. In the first place, let me say that on Saturday last (being in Philadelphia) when the news of the great battle arrived, I determined to come down and do what I could. I got a cheap calico and made it up in a few hours with _______ helping me. Lectured on Sunday evening for the Spiritualist society, and at midnight started with three other women who had joined me for this place, via Baltimore; Had a battle there with the red-tape department, but finally got through, and arrived at six last evening. This A.M. at six, breakfasted and then went out into the hospital across the street, (the Lutheran Church) [Note – This is the Christ Lutheran Church on Chambersburg Street]. Spent 2 ½ hours in service there. Such sights and conditions! All states from health to death before us. The whole town, about 3000 inhabitants, is one vast hospital; all public and a great many private buildings full of sufferers. At a little past nine we set out in a field ambulance for the field hospitals, on and near the battle ground, which extended from the streets of the village to five miles away on the south and east. It is impossible, in a letter, to give you any idea of what awaited us at the end of that drive. The road, for a long distances, was in many places strewn with dead horses; the human dead having been all removed by this time. The earth in the roads and fields is ploughed to a mire by the army wheels and horses. Houses are occasionally riddled with bullets, cannon or shell, and the straggling wounded line the roads, and rest against the fences, (where the latter are not torn down, or burnt up). Breastworks, and the places where batteries were planted, loom up here and there in the desolated fields. The putrid remains of slaughtered bullocks, the cast-off clothing of the dead and wounded, lie scattered about.
Well, at length we left the road and returned into a trampled meadow toward a wooded height. On all hands, as we went, cities of tents (detached from each other) were seen, the field-hospitals of the different corps that were engaged in this fearful battle. When we reached the place we were bound to, there appeared before us avenues of white tents under the green boughs, and many men moving about. But good God! What those quiet looking tents contained! What spectacles awaited us on the slopes of the rolling hills around us! It is absolutely inconceivable, unless you see it. There are miles of tents and acres of men lying on the open earth beneath the trees. I never could have imagined anything to compare with it. Dead and dying, and wounded, in every condition you can conceive after two days in such a rain of missiles. Old veterans who have seen all our battles, say that there never has been such firing anywhere for more than half an hour or so, as there was here for the greater part of nine hours. No wonder that men who were rushing upon and through and upon it, should be torn to pieces in every way. I worked from ten till half past four, without five minutes cessation, in spreading, cutting and distributing bread and butter. Such thankful eyes and stifled voices, and quivering lips, from poor fellows without legs, or arms, or hands, or terribly wounded otherwise, who had seen nothing but hardtack since they were hurt!
At last I came to a group of Confederate prisoners. Such destitute, abject looking creatures as the privates were! Enough of them to cover four such lots as your house is in. [1 ¼ acre lot]
If Mrs. C. is in Santa Cruz tell her I had the pleasure of giving a piece of bread and butter to a friend of hers – Colonel Fry, of Sacramento. He is shot through the ankle, but seems well and very resolute. There was a man and his son lying beside him, each having lost a leg; other men with both legs gone. But the most horrible thing was to see these limbs lying, piled up like offal at the foot of a tree in front of the surgeon’s tent. Adieu. I do the same work to-morrow, and shall be too exhausted to write soon again. Yours, E. W. F.

Because Eliza identified Colonel Fry – who was Colonel Birkett Fry, a former U.S. Army officer, who commanded the 13th Alabama Infantry, and was wounded while commanding Archer’s brigade in Pickett’s Charge – we know that she was at the Union 2nd Corps field hospital at the Jacob Schwartz farm. 3,260 wounded, including 952 Confederates, were at this hospital when Eliza arrived which accounts for her description of the “cities of tents.” She did get one thing wrong about Colonel Fry – he was shot through the thigh and hit in the shoulder by a shell fragment. The wound in the thigh cost the colonel his leg but he survived and was even eventually exchanged and returned to active duty. 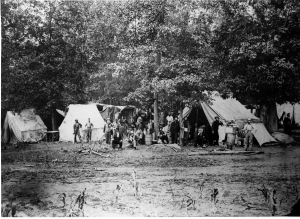 A scene at the 2nd Corps field hospital sometime between July 9 and 11. Note the women in the left center rear of the image. NPS

Eliza did not prove as hardy as Colonel Fry. Four days tending to the wounded exhausted her and she fell sick. She took what was reported to be a severe cold and left for home. Six months later she was dead from consumption, which is consistent with the cold like symptoms she began to exhibit at Gettysburg.
Even at the distance of nearly 150 years, Eliza Farnham’s courage is inspiring. She did not have to go to Gettysburg, but that was not how she lived her life.