Who was Clarkson Nott Potter? He is important to unraveling the Barlow-Gordon story, for it was at his Washington, D.C. residence that John B. Gordon says he met Francis C. Barlow again, sixteen years after the Battle of Gettysburg. [Gordon says it was 15 years later, which is possible since he was re-elected Georgia’s U.S. Senator again in November 1878, so conceivably the dinner may have been late in the year] So, who Potter was is significant because it can help us establish whether such a dinner ever took place or was instead a product of Gordon’s imagination.
Clarkson Potter was a Democratic U.S. Congressman from New York who served from 1869 to 1875, and again from March 1877 to March 1879. Potter returned to Congress the 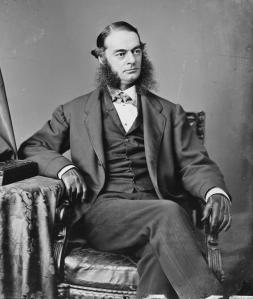 stories from earlier points in the war that helped advance the greater purpose of his lecture, which his biographer wrote was to “establish a common vantage point from which northerners and southerners alike could view the war and derive pride and honor from their participation.” One of the stories he included in the lecture was the Barlow-Gordon incident. He presented the lecture for the first time to an audience of 5,000 at the Tabernacle of Brookyln, in New York City on November 17, 1893. It was so well received that Gordon was asked to deliver it again the next week at Carnegie Music Hall. Since Francis Barlow was a resident of New York City it seems impossible that he was unaware of Gordon’s speech and that the Barlow-Gordon incident was an important element of it. [Ralph L. Eckert, John B. Gordon: Soldier, Southerner, American (Baton Rouge: Louisiana State University Press, 1989), 315.]
The evidence then appears to refute the case that the Barlow-Gordon incident was an invention of John B. Gordon for the purpose of promoting his cause of national reconciliation. There is simply too much testimony from too many different sources to support that some encounter occurred between the two men at Gettysburg. But what did Barlow have to say about it? This is what we shall take up in the third and final part of this series.

2 Responses to Romances of Gettysburg – The Barlow-Gordon Incident, Part 2