By their gallantry in action: Medals of Honor in the Collections at Gettysburg

Corporal Daniel P. Reigle’s Medal of Honor, an original design, presented to him by President Lincoln

Among the tens of thousands of artifacts in the museum collection at Gettysburg National Military Park that document the experiences of the Civil War soldier are four of exceptional value and importance.  Nowhere near the size of a shot-torn battle flag or the gold-braided uniform of a general, these small yet and powerful objects represent the highest standard of courage and self-sacrifice our nation can bestow upon an individual. Sixty-three of them were awarded to soldiers of the Army of the Potomac for individual gallantry as a result of the Battle of Gettysburg, and hundreds more during the remaining months of the American Civil War. They are the Congressional Medal of Honor.

On Saturday, September 21, Gettysburg National Military Park will offer a series of free interpretive programs exploring the Medal of Honor and the battle of Gettysburg.   The programs are being scheduled to coincide with the 2013 Congressional Medal of Honor Society Convention which is being held in Gettysburg, Pa., Sept 18—22.

The National Park Service at Gettysburg has the distinct honor of caring for and preserving on behalf of the American people, four Medals of Honor awarded to three individuals between 1864 and 1904. The first medal is of the pattern approved by President Abraham Lincoln for the United States Army in July of 1862. The medal is composed of a rectangular bronze bar with a federal shield at the center flanked by a cornucopia with laurel leaves along the bottom edge. Suspended below this bar is an American flag ribbon with the blue union in corduroy and the striped portion in ribbed cotton. Beneath the ribbon is a bronze spread eagle clutching a saber and perched atop crossed cannon barrels with a pyramid of eight cannonballs below. Suspended from this eagle is an inverted 5-point bronze star with a circular relief at the center of Minerva, the Roman Goddess of Wisdom and War, fending off discord. The relief is encircled by 34 tiny 5-point stars with an oak and laurel branch inside each arm of the star. The pointed end of each arms ends in a tiny trefoil. The reverse side of the star is engraved “The Congress To Corp’l. Daniel P. Reigle Co. F 87th Penna. Vet. Vols.”

This medal was awarded to Corporal Reigle for his actions at the Battle of Cedar Creek, Virginia, fought October 19, 1864. Reigle, at that time, was the color-sergeant of the 87th Regiment of Pennsylvania Volunteers, carrying the unit’s national colors (the American flag with the unit’s designation painted on).  His citation for the medal reads “For gallantry while rushing forward to capture a Confederate flag at the stone fence where the enemy’s last stand was made.” For his bravery that day, Major General Philip H. Sheridan, commander of the Union Army at Cedar Creek, sent the 23 year old Adams County native to Washington with the captured flag, to present it to the War Department as a trophy of the Union victory. The medal was awarded to Reigle by President Lincoln himself, and he was also granted a 35 day furlough to return home to Adams County. Reigle survived the war and returned home to live a long, quiet life. He died on March 19, 1917, at the age of 75, and was buried in the Mount Carmel Cemetery in Littlestown, Pennsylvania.

The original Medal of Honor, left, and the G.A.R. medal, right.

The second medal is of the 1896 pattern, issued to Civil war veterans 31 years after the end of the conflict. The appearance of the medal remained much the same except for a change in the cloth ribbon linking the bronze bar to the inverted 5-point star. The reason given for this change is that many of the decorative elements of the first pattern Medal of Honor were copied and issued by veteran’s organizations created after the end of the Civil War. The Grand Army of the Republic’s (G.A.R.) medal, available to every veteran that joined, was very similar in appearance to the Army’s Medal of Honor with the exception of the ribbon and features cast into the inverted bronze star. Hundreds of thousands of G.A.R. medals were made and issued over the past 30 years causing consternation among top government and military officials. Apparently, the easiest solution was to simply change the ribbon rather than redesign the entire medal. The American flag-style ribbon found on the Civil War version was replaced by a red ribbon with a narrow vertical white stripe down the center of a wider blue stripe. 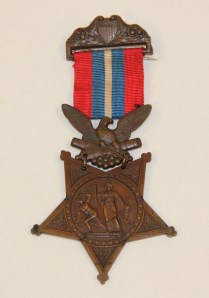 This second version of this medal was awarded to 1st Lieutenant James Jackson Purman of Co. A, 140th Pennsylvania Infantry, for his heroic actions on the afternoon of July 2nd, 1863, in the vicinity of the famous “Wheatfield.”  His citation for the medal reads “Voluntarily assisted a wounded comrade to a place of apparent safety while the enemy were in close proximity; he received the fire of the enemy and a wound resulted in the amputation of his left leg.” The enemy’s bullet shattered his left ankle and forced Purman to lie in between the lines of battle during the evening of July 2nd. The next day, while adjusting his position to make himself more comfortable, another bullet passed through his right leg inflicting a second wound. He was later brought safely off the battlefield by Union soldiers. The back of Purman’s medal is inscribed “This Congress/ to/ 1st Lieut. James J. Purman/ Co. A, 140th PA Vols./ for GALLANTRY at/ Gettysburg, PA./ July 2,/ 1863.” The medal was awarded to Purman by Congress on October 30, 1896. The Pennsylvania native was discharged from the army in the spring of 1864 and returned to Greene County where he later studied law. By 1880, James Purman moved to Washington, DC, where he attended medical school becoming a physician. He died May 10, 1915, age 74 years. He rests forever among his comrades at Arlington National Cemetery.

The third Medal of Honor in the Gettysburg museum collection is also of the 1896 pattern and was awarded to Sergeant Wallace W. Johnson of Co. G of the 6th Pennsylvania Reserves (35th Regiment of Infantry) for his gallantry at the Battle of Gettysburg on July 2nd, 1863. His citation for the medal reads “With five other volunteers gallantly charged on a number of the enemy’s sharpshooters concealed in a log house, captured them, and brought them into the Union lines”. While under an intense fire from the enemy, Sergeant Johnson and his five comrades, Chester S. Furman, John W. Hart, George C. Mears, Levi J. Roush, and Thaddeus S. Smith, stormed a log cabin near the Wheatfield and captured a dozen Confederate soldiers complete with weapons and accoutrements. All six men were later awarded the Medal of Honor for the same courageous action. The back of Johnson’s medal is inscribed “The Congress/ to/ Sergt. Wallace W. Johnson/ Co. G. 6th Pa. Res. Vols./ for/ gallantry at Gettysburg, Pa./ July 2,/ 1863.” The medal was awarded to Johnson by Congress on August 8, 1900.

Four years after Wallace W. Johnson received his medal, and Medal of Honor changed again. This time the entire medal was redesigned due to the efforts of General George L. Gillespie of the United States Army. Gillespie was also a recipient of the Medal of Honor, and felt that the minor change in 1896 did not provide enough “distinction” for the medal.  With the support of the Secretary of War and brother army officers, Gillespie petitioned for a redesign of the medal. On April 23, 1904, Congress authorized the change.  Gillespie went even further to protect the new design from being copied by obtaining a patent for the medal in November of 1904. 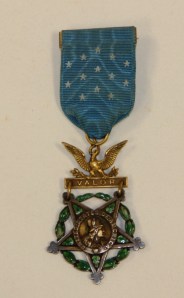 The 1904 design of the Medal of Honor

The new design dramatically changed the appearance of the medal from its predecessors. The medal was now composed of a rectangular gold bar with a sky-blue silk ribbon gathered into a gold ring at the bottom. Thirteen small white 5-pt. stars are embroidered on the front of the ribbon and arranged in three chevrons of 5-5-3. Suspended from a hook on the ring is a gold spread eagle clutching arrows and an olive branch while perched atop a narrow rectangular cartouche proclaiming “VALOR.” Suspended from the cartouche by two rings is an inverted 5-point star. At the center of the star is a sculpted profile of Minerva, the Roman Goddess of Wisdom and War. This circular relief is surrounded by “UNITED STATES OF AMERICA” with a tiny federal shield at the bottom.  Each arm of the star has a single green enameled oak leaf inside, and the tips of all five arms end in a tiny trefoil. The star is surrounded by a green enameled laurel wreath that is smaller than the star. Engraved on the back of the “VALOR” cartouche  is “THE CONGRESS/ TO” while on the back of the star is “Sergeant/ Wallace W./ Johnson,/ Co. G. 6th Pa. Res. Inf. Vols./ Gettysburg,/ July 2,/ 1863.”

The inscriptions on both of Sergeant Wallace W. Johnson’s medals

The new 1904 Medal of Honor was authorized by the Congress specifically to replace the earlier 1896 medal. Veterans were required to surrender their medal in order to receive one of the new design.  The Congress soon discovered that many of the veterans refused to part with the 1896 medal for sentimental reasons, it being the first acknowledgement of their extraordinary services to the Nation. Several years passed with few 1904 medals being issued. On February 27, 1907, Congress authorized the 1904 medal to be sent to all recipients of the 1896 medal who requested it, without having to surrender their original medal. The only stipulation Congress placed on the veteran was that both medals could not be worn at the same time. Thus sometime in or after 1907, Sergeant Wallace W. Johnson received his second Medal of Honor.

Sergeant Johnson was mustered out of service at Harrisburg, Pennsylvania, on June 11, 1864. In the years that followed, he married, raised a daughter, and was active in railroading and veterans organizations. He died December 30, 1911, on his 69th birthday. This quiet, humble hero was laid to rest in the West Laurel Hill Cemetery in Bala Cynwyd, Pennsylvania, under a simple granite headstone that reads “Wallace W. Johnson, 1842-1911.”

Of the 1,522 Medals of Honor awarded to the greatest generation of the 19th century, four now reside permanently at Gettysburg National Military Park. Daniel P. Reigle, James J. Purman, and Wallace W. Johnson, never set out to achieve immortality when they joined the army. Instead, immortality found them in a moment of crisis when the fate of their comrades, and a Nation, hung in the balance. They all stepped forward selflessly and answered that call, and a grateful nation responded.

Paul M. Shevchuk has been with the National Park Service at Gettysburg National Military Park and Eisenhower National Historic Site since 1978. He served as a Ranger Historian/ Interpreter at both sites for 12 years. Since 1990 he has been a member of the Museum Services Staff curating the park’s vast collection of Civil War artifacts.

4 Responses to By their gallantry in action: Medals of Honor in the Collections at Gettysburg