Another Piece of the Puzzle on Cemetery Ridge

Yesterday, another piece of the puzzle was locked into place on Gettysburg’s Cemetery Ridge when National Park Service (NPS) staff moved the Battery F 5th U.S. Artillery monument back to the spot where it had originally been placed more than 100 years ago. In the early 1960s when Gettysburg National Military Park was preparing to build the Cyclorama building, the monument was moved. The spot where it had existed for more than fifty years would soon be covered in concrete.

About the monument: The monument represents the 116 men of Battery F, 5th United States Artillery who were led at Gettysburg by First Lieutenant Leonard Martin, a twenty-two year old West Point graduate. They brought six ten-pounder Parrott rifles to the battlefield and belonged to Col. Charles Thompson’s artillery brigade of the 6th Army Corps. On July 3rd,

following the repulse of Pickett’s Charge and the two-hour artillery bombardment that preceded it, the battery was ordered to limber up and report to the front. Around 4:00 p.m. the battery occupied a position in Ziegler’s Grove on the northern extension of Cemetery Ridge. They remained here as a reserve for the rest of the battle, not engaged and suffering no casualties. 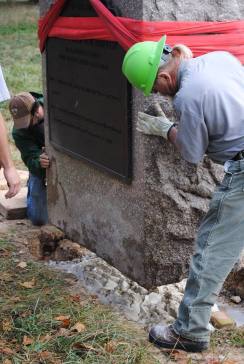 Beginning in 1907 the United States War Department began marking the position of regiments and batteries belonging to the regular army. The granite marker indicating the position of Battery F, 5th US Artillery was placed during this time and is the battery’s only representation on the field.

One of the original goals of the park’s Museum and Visitor Center, which opened in 2008, was to return the center of the Union battle line on Cemetery Ridge to its appearance at the time of the fighting and to restore, preserve and protect historic and commemorative features where the two outdated buildings and their parking lots once stood. The other goals were to: take better care of the artifacts and archival collections of the park; ensure the long term preservation of the Cyclorama painting which was threatened by the conditions in which it had been displayed; and improve the museum experience for park visitors.

Demolition of the old Visitor Center in 2009. NPS photo by Barb Adams.

Thanks to our partners at the Gettysburg Foundation we have continued to make steady progress. They have raised funds for and accomplished: the demolition of the old visitor center in 2009; the planting 41 apple trees to reestablish the Frey orchard (North) in 2010; and the demolition of the Cyclorama building in 2013, and the removal of the old Visitor Center parking lot in 2014.

Each one of these steps has helped to 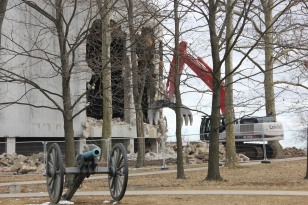 reconnect the historic landscapes of the battlefield. By removing modern intrusions on NPS lands along the battle line of the Union army we have helped to reconnect the famous Union fishhook. As a result, we have improved the integrity of the battlefield landscapes and improved our visitors’ understanding of what happened at Gettysburg and why it’s so important. It doesn’t get more mission related than that for national parks… preserving the resources and improving public access and understanding.

There are a few more steps to come in this long project. The Gettysburg Foundation is now raising funds for changes to the National Cemetery parking lot which would allow the replanting of missing portions of Ziegler’s Grove, and rehabilitation of the historic terrain of Ziegler’s Ravine, a low point in Cemetery Ridge partly filled in to build the Cyclorama parking lot, which is now known as the National Cemetery parking lot.   This lot will be reduced in size to allow space to reestablish some of the missing terrain features as well as historic Hancock Avenue’s end at  Taneytown Road. In the meantime, in early 2015, volunteers and park staff will be rebuilding historic fences near the location of the old Visitor Center parking lot and along Steinwehr Avenue.

5 Responses to Another Piece of the Puzzle on Cemetery Ridge