Gettysburg Artist in Residence to be at David Wills House Friday, July 7, 5-8 p.m.

Gettysburg National Military Park’s Artist-in-Residence William Bretzger will exhibit his work at the David Wills House this Friday, July 7 at 5:00-8:00 p.m.  The exhibit is free and open to the public.

Bretzger has been getting up every morning before the sun rises.  He’s been turning in after dark, too.  The reason? To capture what he calls that “perfect opportunity.”

More than sunrise and sunset photos at Gettysburg, Bretzger uses those moments at dawn and dusk as the foundation of light for his color photographs, which he enhances through a variety of onsite lighting to tell a story about what happened at a particular battlefield location.  His artistry highlights the landscapes and structures soldiers would have encountered as they crossed the fields at Gettysburg. 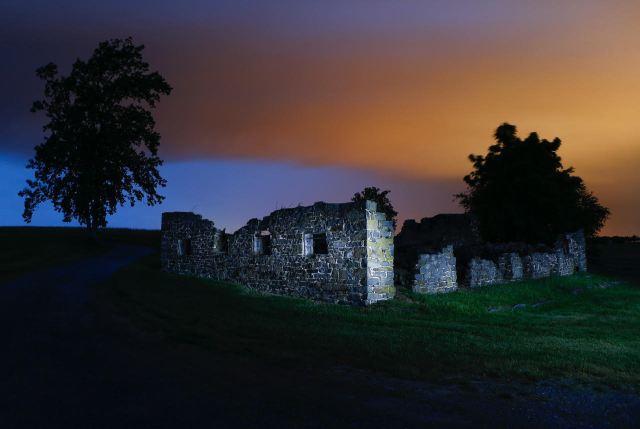 In some instances, Bretzger projects an image of a person who has a direct connection to a particular monument or building.  In the span of just a short time, he manages to project an image, set up just the right lighting, and capture a feeling that puts a face to history.  His artwork includes images of General George Meade at the house Meade used as his headquarters during the Battle of Gettysburg.  It also includes 22-year-old Captain John Bigelow’s image on the 9th Massachusetts memorial where Bigelow was wounded.  And, there are even more images that define where a soldier fell or won renown. 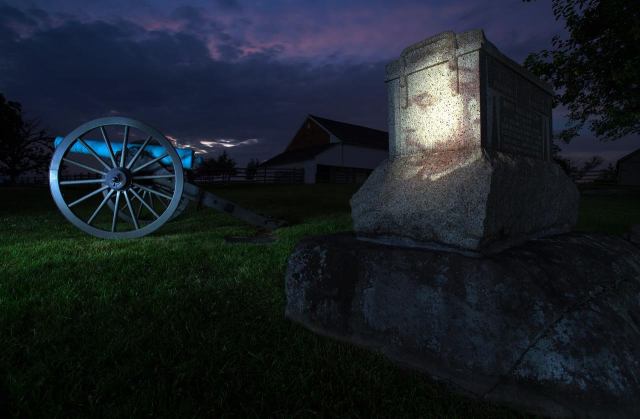 Image of Captain John Bigelow on one of the three monuments to the 9th Massachusetts Battery at Gettysburg National Military Park. Art image by William Bretzger (Copywritten).

During the day, Bretzger uses black-and-white film to capture other stories he wants to share, too, developing the film alone in the basement of his temporary residence at one of the park’s historic houses.  “I thought it would be a challenge to set up a darkroom, but the house works out perfectly.  The basement is dark and there’s a large sink there for clean-up,” he said.

Bretzger is developing film in preparation for his exhibit at the David Wills House, Friday, July 7 at 5:00-8:00 p.m.  The exhibit is free and open to the public.  He plans to showcase his best artwork from his past few weeks at Gettysburg, and will be available to discuss his imagery, experiences, and techniques with visitors.

Bretzger works as a staff photographer at the News Journal and at Delaware Online, and has been visiting Gettysburg for more than 20 years.  “I’m just drawn to Gettysburg,” he said.  “From Delaware, it’s a long daytrip, so having the opportunity to be on location here and capture all these shots and these moods is amazing.  I am truly grateful for the opportunity.”   Bretzger thanked Gettysburg National Military Park, the Gettysburg Foundation, and the National Parks Arts Foundation.

“I’ve never worked on a project this long and this hard,” Bretzger said. “But, it’s been great.  I’ve always considered myself a photographer, but now I am happy to consider myself an artist.”

Article by Debbie Dortch, a public affairs specialist with Naval Supply Systems Command, on special assignment to Gettysburg National Military Park.  She has more than 20 years of experience in public affairs and publishing, including working at National Park Service Headquarters in Washington, D.C.