“The hissing bullet has sung his requiem.” The Obituary for a New York Soldier.

The devastating news arrived in Dunkirk, New York on a warm July day- Private Thomas Holland, the  town’s former clothing merchant, a soldier in the 72nd New York Infantry, was dead, killed at Gettysburg. Like so many families affected by such a loss, the Holland family would never be the same.

Born in England to Irish parents David and Bridget Holland, Thomas was brought to America as an infant in the years prior to the Great Irish Potato Famine. Determined to give his growing family a proper life and decent living, David Holland moved his family to Dunkirk on the shores of Lake Erie where he opened a mercantile and clothing business. The family prospered with the addition of two daughters- Kate and Maggie- and another son, David, Jr. Thomas worked in his father’s business and by 1860, he managed the clothing part of the operation. The future seemed bright but then war came and Thomas determined to volunteer for the Army. On August 25, 1861, he joined one of the first companies raised that summer in Chautauqua County, destined to become Company E of the 72nd New York Volunteer Infantry Regiment, one of the core regiments designated for General Daniel Sickles’ “Excelsior Brigade”.

Private Holland was an exemplary soldier. In April 1863, he was chosen with a detail of others to act as the Grand Guard during a visit to the Army of the Potomac by President Lincoln. “The President reviewed 4 Corps de Army,” Holland wrote his mother on April 8. “it was a Grand Sight to see 70,000 Infantry in column at present arms as he passed them. Our Army never was in better fighting condition.”  Did Holland echo this same sentiment as he and his comrades trod roads from Maryland into Adams County on a warm July 1, the distant thunder of cannon ahead a sure sign that trouble lay ahead?

It was long after nightfall when the Excelsior Brigade arrived on Cemetery Ridge south of Gettysburg and the soldiers broke ranks to catch a few hours of fitful sleep. Skirmish activity and occasional cannon fire throughout the next day kept them alert until the early afternoon when the brigade formed line of battle and moved forward to a high ridge crowned by the large peach orchard owned by Joseph Sherfy, whose house and farm buildings stood just across from the 72nd’s position near the Emmitsburg Road. For over an hour, Confederate artillery sent shells over the regiment. The men hugged the ground, taking advantage of what little cover was offered. The approach of Confederate infantry “opened the ball” and very soon the New Yorkers found themselves swept up in the chaos of battle among the young fruit trees, the line forced back in a determined but decimating retreat. Among the fallen was Private Holland, who died four days later in a Federal field hospital. 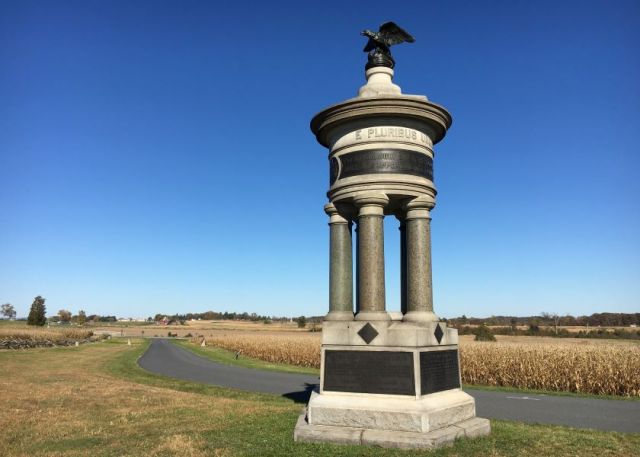 The monument to the Excelsior Brigade in “Excelsior Field”. Bronze tablets around the base of the monument recognize each regiment of the brigade commanded at Gettysburg by Colonel William Brewster. (Heiser, Gettysburg National Military Park)

As one would expect, the news of Holland’s death stunned and shocked his family, especially the sisters with whom he was very close.  Though comforted by friends and neighbors, the Hollands were haunted by Thomas’s death so far from home, during a year where the bloodshed seemed endless. Then one day, a letter arrived at the Holland home addressed to Maggie. It was solemn effort by a family friend, a eulogy and memorial to the sacrifice that cut so deep:

The fratricidal war that unhappily prevails in our country has carried death and sorrow to almost every home throughout the length and breadth of this hitherto glorious and peaceful land. Almighty Ruler of the Universe, when shall this cruel war have an end? When shall the contending brothers, when shall the North, South, East and West learn that great and important lesson, that spiritual injunction, brotherly love? Shall it be when we are dead, steeped and saturated in our own blood, thrown side by side in common graves? Shall it be when our country is worthless and a prey to the enemies of liberty? Or shall we learn it too late; when we are summoned to that awful tribunal of justice where God renders their just dues to all mankind? Oh! We shall not judge! It rests with Him who “doeth all things well.”

Civil War is indeed upon us. And Oh! what a war! It has caused the death of as brave men as ever trod the tinted field of battle. It has caused parents sad and broken hearts. It has caused sisters and brothers to weep and mourn for the loved ones that in battle are slain. It has caused the untimely fate of many a young and promising man, whose name and fame might live in history, honored and revered by generations yet to come. Many a young and promising genius has fallen ere the years of maturity had set upon his calm and unfurrowed brow. It is true they fell in their country’s cause, nobly battling in her defence (sic.). And may God grant them eternal repose.

How painful it has been to us, when after the storm and smoke of battle had passed away, to hear the sad intelligence that many of our friends (page 2) and fellow citizens had fallen in bloody strife, never to rise again until God shall summon them to judgement. Names too numerous to mention. Names honorable and brave have passed away from us forever. Oh! how fondly we bear them in mind. How we clustered around their coffins to catch a single glance at the heroic dead. How we followed their remains as it moved mournfully and in slow, sad and pensive tread. How willingly one paid the last tribute of respect to the departed dead.

On the distant and bloody plains of Gettysburg, many of our friends and associates have fought their last fight. Many from our own midst have fallen. They all deserved to be held in greatful (sic.) remembrance for their many virtues, for their patriotism and unflinching devotion in the cause of their country. When their country was in danger, they sacrificed (sic.) everything to go forth and maintain the honor and dignity of this Republic Under that glorious ensign of liberty the strong and brave have fallen.

There was one among the many. One noble form. One cherished name dear to me. One friend beloved by me, ‘een as I, my brother love, that the hissing bullet has sung his requiem. The magnetic telegraph swift as the lightning flash, has brought to us the sad intelligence that Thomas Holland loved and honored by all who knew him, appreciated his gentlemanly traits, sterling worth and undoubted honesty, has passed away from us to receive, I trust, (page 3) a crown of everlasting and imperishable glory. He is no more. The strong and youthful man sleeps in the arms of death. God in His mercy has seen fit to call him from this wicked world to a land infinitely more bright and celestial. Young in years; possessed of a more than ordinary mind; endowed by God and nature with splendid faculties, he has passed from life to death. No deceit, no malice, no envy lurked within his breast. No, he was even animated by a noble and manly spirit. Open hearted generous and truthful in his intercourse with men; courteous as a gentleman; agreeable manners; polished and refined in society. If he had a fault, it was his own, and it rests with him. He bore no ill will to any living being. He sank to rest on friendly terms with all mankind. No man that even knew him can say, that he ever willingly done them an injury.

He received his mortal wounds at the battle of Gettysburg, July the second, and died from the affects (sic.) on July the ninth. He leaves a father and mother, two sisters and a brother, together with many other relatives and friends to mourn his premature death. He left our midst full of hope and bright anticipations for the future, but he returns to us in life no more. “He has fought his last fight and no sound can awake him to glory again.” Sorrow and dispair (sic.) reigns in his home over his untimely fate and irreparable loss. A father that fondly reared him; a mother that was most passionately attatched (sic.) to him; sisters that loved him more dearly than their life; a brother whose love for him was unbounded; must mourn for him that now in the land of spirits dwells. May they all meet, may they all be partakers of that glorious heritage, which God has promised to his faithful children.

Hopefully the Holland family found some comfort in Mr. Murphy’s heartfelt eulogy and though it probably did not ease all their pain, the document was kept as a reminder of the son and brother who never returned. Private Holland’s final resting place is unidentified though he is most likely buried at Gettysburg as an unknown, only this obituary and his name listed as a Gettysburg casualty to remind us of this one man’s worth. Doubtless other such eulogies found their way into a grieving family’s hands after Gettysburg; did they include the same sentiments as those expressed for Thomas Holland?

2 Responses to “The hissing bullet has sung his requiem.” The Obituary for a New York Soldier.