The War on Boredom Vol. I

There is an old saying about Army life that goes something like  “soldiering is 99% boredom, and 1% sheer terror.”  Finding the bona-fide original author of this phrase proves to be quite a challenge today though it can be found in writing from as recent as the Global War on Terror to as far back as the American Civil War.  To be sure, the sentiment extended into almost every soldier’s experience during the Civil War.

While it would be easy to assume that the vast majority of a Civil War soldier’s time in the military was spent on the frontlines doing battle with the enemy, in fact, only a tiny fraction of his time was spent in combat.  Instead, most soldiers spent their time staving off an overwhelming sense of boredom as the men languished in camps for long periods of time between campaigns.  This, above all other aspects of the Civil war is something most Americans can relate to this week as many are at home keeping their distance from friends and family in hope of slowing the spread of the Coronavirus disease and in turn, doing their best to combat boredom.

In this series of posts titled “The War on Boredom,” we will look at a variety of ways soldiers did their best to keep their hands busy and their minds off the reality of living in a time of great stress and consternation.

“Immense gambling is going on all over camp.”
Games of Chance and the American Civil War

Each day during the summer at Gettysburg National Military Park, we host a program for children aged eight to twelve years old called “Join the Army” whereupon young “recruits” can get an idea of what Army life was like during the Civil War.  When we ask the young visitors what they think soldiers did to pass the time when they weren’t busy with some other chore, invariably a “recruit” shouts out “They Gambled!”

Indeed gambling, for better or worse, has been the quintessential soldier pastime for generations of Americans in uniform.  After all, a deck cards or a set of dice can be easily stowed amongst other gear and the prospect of extending a monthly salary has always been enticing.  Civil War soldiers often engaged in a variety of games of chance, some still exist today while others are not as popular as they once were. 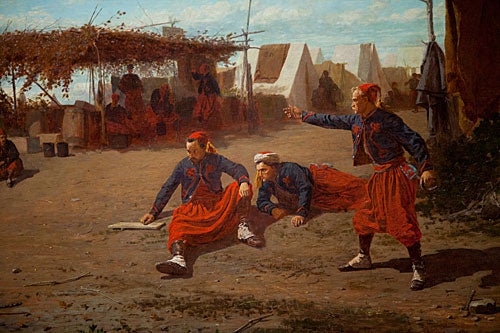 The most popular card game was likely a game called “Bluff” by the soldiers.  Today we call it poker.  A deck of playing cards in the 1860s was set up in much the same as a modern deck consisting of four suits, with thirteen cards per suit.  However, there were generally not numbers or letters denoting what the cards were, simply faces and sets of clubs, diamond, hearts and spades for the “numbered” cards.  Whereas today there are many variations on the game of poker, during the Civil War most soldiers played what we call “straight” poker whereupon players are unable to exchange any cards and must bet based on what they are dealt by the dealer.  The player dealt the best hand would win the pot of money after all the bets were placed.  The “best” hand would be determined by a hierarchical listing of hands ranging from pairs of the same type of card all the way up to a royal flush (an ace, king, queen, jack and ten of all the same suit).

A popular dice game called chuck-a-luck was a bit more involved in that it required a game board and a set of dice. A typical chuck-a-luck board consists of six numbered squares, players put money on the number, betting that the banker, when he rolls three dice will roll one or two of those numbers.  The players are paid out according to odds set by the banker. If the banker rolls three of the same number, the player that bet on that number loses all the money they bet.

Finally, the simplest means of gambling during the Civil War came in the form of raffles.  These games of chance were likely as simple as they sound.  Buy a ticket with a number on it, if that number is drawn on the day of the raffle, a prize is won.

While all of this sounds like great fun and games, officers of both armies recognized a potential for moral decline in their ranks should gambling become addictive amongst the men.  For some officers, the desire to stop gambling was based on religious views, for others the desire was rooted more in keeping the peace in camp as fights would often break out over suspected cheaters.

Some officers went so far as to ban gambling in its entirety from the unit.  This was the case for at least an entire brigade in the Third Army Corps during the Gettysburg Campaign as on June 20, 1863 Hobart Ward’s men were issued Special Order Number 2 which stated that “All gambling and playing at games of chance in this command will be strictly prohibited from this date.  Any violation of this order on the part of the enlisted men will be attended with severe punishment and all officers neglecting to enforce the same will be called to account for neglect of duty.”

In some cases, the soldiers regulated their gambling on their own. Samuel Hankins of the 2nd Mississippi remembered that just before a battle “there would be a searching of pockets for gambling goods, playing cards especially.  The thought of being killed with such in their pockets induced the soldiers to throw them away.  The road would soon be covered with playing cards, dice, dice boxes, etc.”  Evidently the men of his regiment were worried about the shame their family would have to endure should their bodies be found with gambling paraphernalia in their pockets.

Nevertheless, when not concerned about their moral decline or imminent demise, gambling remained a staple of the war on boredom which unfolded in every camp of the American Civil War.