On West Confederate Avenue, located just to the north of the North Carolina Memorial, stands an interesting artillery piece. It is a 12-pounder, bronze, but cast in the Confederacy, at Memphis, Tennessee in 1862 by the firm of Quinby and Robinson. And thereby hangs a tale; perhaps several. 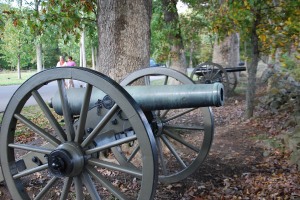 In April of that year, General Beauregard issued a call to the people of the South for the donation of metals to meet the wartime emergency; specifically, bells for the casting of cannon. His request prompted the following poem, which ran in the Memphis Commercial Appeal later that month. Roughly following the meter of Edgar Allen Poe’s The Bells, the author exhorted his readers to remember that desperate times called for desperate measures.

Melt the bells, melt the bells,
Still the tinkling on the plains,
And transmute the evening chimes
Into war’s resounding rhymes,
That invaders may be slain
By the bells.

Melt the bells, melt the bells,
That for years have called to prayer,
And, instead, the cannon’s roar
Shall resound the valleys o’er,
That the foe may catch despair
From the bells.

Melt the bells, melt the bells,
Though it cost a tear to part
With the music they have made,
Where the friends we love are laid,
With pale cheek and silent heart,
‘Neath the bells.

Melt the bells, melt the bells,
Into cannon, vast and grim,
And the foe shall feel the ire
From each heaving lung of fire,
And we’ll put our trust in Him
And the bells.

Melt the bells, melt the bells,
And when foes no more attack,
And the lightning cloud of war
Shall roll thunderless and far,
We shall melt the cannon back
Into bells.

Melt the bells, melt the bells,
And they’ll peal a sweeter chime,
And remind of all the brave
Who have sunk to glory’s grave,
And will sleep thro’ coming time
‘Neath the bells.

General Beauregard’s call, and the patriotic fervor of the moment, were well in evidence at the time, and provided material for the manufacture of a number of guns. The Quinby & Robinson, # 38, was produced before the fall of Memphis to the Federals in June of 1862.

The trunion on the Quinby & Robinson, #38. GNMP

So much material of this sort was donated that much of it was sent downriver to New Orleans, to facilities there, for similar purposes. It, of course, was lost to the Confederates when the “Crescent City” was taken in late April. Combing through the “spoils of war,” one Union correspondent there could not but help notice a bias reflected in the donations.   There were no ancient bells, no bells of historic worth, no old Spanish or French relics – those the Southerners had kept, and had contributed instead the products of Northern skill. With only a dozen exceptions, the bells had upon their rims or tops the names of Northern makers – of the Buckeye Works of Cincinnati, the Allaire Works of New York, of Fulton Foundry, Pittsburg, and of the foundries of Troy, of Louisville, and other places.
Inspired by this capture, a Northern poet produced the following. Entitled “Beauregard’s Bells,” the work took due note of their change in status.

Oh, swing them merrily to and fro;
They’ll not boom with a traitorous blow.
Shaped into cannon, not one – they lie
Eloquent tokens of victory.
Sing out, O bells, on the summer wind;
Farragut’s name with thy music twin[n]ed.
The Crescent slips from the serpent’s hold,
Though bound in many an angry fold;
Oft ye have pealed for the bridal morn,
Tolled for souls into mystery born,
Roused, on plantation, master and slave,
Yet, ye were doomed, till won by the Brave.
O, ring ere long for the shout of peace;
Jubilant ring when this strife shall cease.

Ring out Rebellion, dark as a pall;
Ring for Stars and Stripes floating o’er all.
Laugh out on the Northern winds, I pray;
Peal out, for this is your marriage day.
Wedded to Freedom, ‘mid hills and dells,
Ye are no longer Beauregard’s bells.

That these bells were not to be converted into Confederate guns perhaps saved some of them, for a time at least, from the damage of other patriotic fires. Post-war, many Southern artillery pieces were “subject to conversion” into all sorts of other things, from 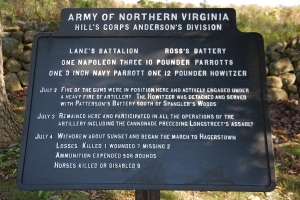 The tablet on Seminary Ridge marking the position of Ross's battery, to which #38 belonged. This is an example of one of the tablets that might have been melted down for the war effort. NPS

Grand Army of the Republic medals to the large “Winged Victory” sculpture that sits atop the Pennsylvania Memorial. Much of this bronze, being a polyglot mixture of different purities, later triggered complaints from those who encountered it again. But the hunger for metal by a nation at war dies hard, and during World War II, a plan was actually drawn up that envisioned the gradual removal of not just cannon, but other bronze and iron memorials in support of the war effort, should the demand call for it. No guns or monuments were surrendered, but a number of more peripheral elements (curbside bollards, low iron fences, signs, etc.,) were lost. On “the outside,” however, a number of communities across the nation had taken “that old cannon” from its honored resting-place in the cemetery or the courthouse square during a scrap drive and had thrown it into the national furnace, “for the cause.”
Thus we return to Quinby & Robinson # 38 or to the #15 Augusta Foundry Napoleon, with its obvious casting flaws, resting at the Peace Light. In his History of the American People, Woodrow Wilson had remarked upon the dedication of the Southern people, observing they had been willing to sacrifice so much for their beliefs. The greater, and perhaps more fortunate, secret is that over six generations ago, when faced with a “cause” of their own, our predecessors determined to maintain all these bits of bronze and iron, across the battlefield so that we may more readily see and understand what their own , our own, ancestors did here. Imagine, for example, Cemetery Ridge without General Meade, Round Top without General Warren, or Seminary Ridge without the batteries arrayed against the Federal positions. So much of the story is in the metal, placed by those who heard the roar of the guns – and perhaps, the ringing of the church-bells after all had ceased.