One of the most fascinating monuments on the Gettysburg battlefield is one of the last most visitors pass. Just beyond the Brian Farm on North Hancock Avenue is the bronze likeness of an elderly man. He rests on a stone bench, a wooden staff in his right hand, a 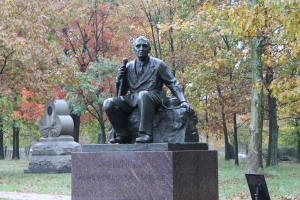 crumpled hat to his left, as he looks out over the field where Longstreet’s Assault met its fate on July 3rd, 1863. At first glance it seems slightly out of place. The man has no sword or military accoutrements. He isn’t charging forward to the unseen enemy or pointing towards the approaching danger. His dress, complete with neck tie, is clearly 20th century, standing in stark contrast to most of his 19th century colleagues. Who is this man and why does his likeness stand watch over the Gettysburg battlefield? A small inscription, etched into the pedestal to his left, offers a clue.  “Albert Woolson of Duluth, Minnesota. The Last Survivor.”

Albert Henry Woolson has the distinction of being the last surviving member of the Union Army, and one of the last veterans of the Civil War. Woolson claimed to have been born February 11, 1848, but census records seem to indicate the year to actually have been 1850. His father, Willard Woolson, served with Grant at the Battle of Shiloh where he was wounded, eventually dying as a result. Albert enlisted as a drummer with the 1st Minnesota Heavy Artillery in October of 1864, served for just under one year, and ended the war having never seen combat. Woolson died on August 2, 1956, at about 106 years of age, having outlasted the more than 2 million comrades who had served with him during the war. The Grand Army of the Republic, a powerful post-war veterans group, erected the monument to Woolson not long after his death. 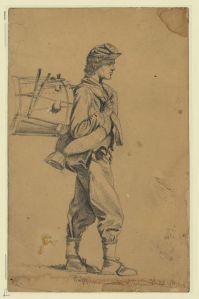 resettled near Lowell, Massachusetts where they lived at the onset of the Civil War. On July 19, 1862 fourteen year old Lurvey enlisted as a drummer boy in the 40th Massachusetts Volunteer Infantry.

The 40th Massachusetts was initially stationed near Washington, D.C. and Lurvey would have spent much of his first few months in the service manning fortifications and approaches to the nation’s capital. In the spring of 1863 the 40th was transferred to the coast of southern Virginia, participated in the Siege of Suffolk and in July of 1863 was active on the Virginia Peninsula. How then did Lurvey end up at Gettysburg?

It appears that Lurvey’s health was often poor. The summer of 1863 found him recovering in a Washington, D.C. hospital from some ailment contracted during his time in the field. He was well enough by June to be sent along with the Union Army of the Potomac as it pursued Robert E. Lee and the Army of Northern Virginia into Pennsylvania. Lurvey’s role in the battle of Gettysburg was limited, but brutal. Assigned to the “Medical Corps,” Lurvey recalled that, “I was to stand by and carry out the soldiers’ arms and legs as the doctors amputated them. I guess that was the day I grew up and left boyhood forever.”

James M. Lurvey’s already questionable health seems to have further deteriorated during his Gettysburg experience. Not long after he was transferred to the Veteran Reserve Corps and eventually discharged due to his youth and poor physical condition. He reenlisted the following year and ended the war as a Private in the 4th Massachusetts Heavy Artillery.

In May, 1949, more than 85 years after the Battle of Gettysburg ended, Life Magazine featured a pictorial of the last surviving veterans of the American Civil War. One of the sixty eight men pictured was James M. Lurvey. At 101 he was the sole survivor of Meade’s army, the last living link to the Battle of Gettysburg. He would die the following year.

As we approach the sesquicentennial of the Battle of Gettysburg it is perhaps appropriate to remember that in the vast spectrum of human history 150 years is a short amount of time.

1 Response to The Last Veteran