The Enduring Might of Melody and Verse: Instrumental Pieces 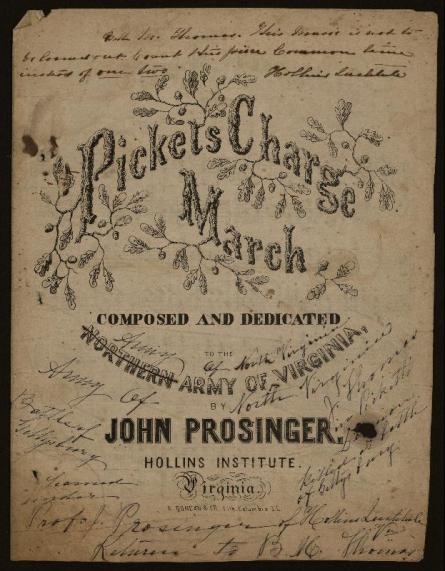 While the Battle of Gettysburg was a defeat for the South, pride could still be taken in the bravery of Southern soldiers.  The following march was composed by John Prosinger of the Hollins Institute of Virginia sometime between 1863 and 1865; this song commemorates the bravery shown by those sections of the Army of Northern Virginia that made Pickett’s Charge.  Please note this is an instrumentalist piece.  All the music comes from instruments, and there are no verses. 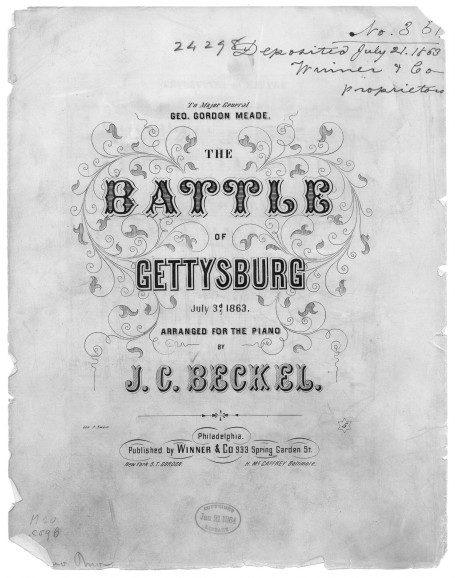 The Battle of Gettysburg (Library of Congress)

Another instrumentalist piece commemorating the Battle at Gettysburg, in this case the Union victory, is the song Battle of Gettysburg composed by J.C. Beckel in 1863.  In the piece, Beckel tells the story of the battle through melody alone; once again, there are no words.  Even so, certain sections represent the various events of the battle.  In the sheet music, there are notations describing the various events that go along with the music.  Note the incorrect parts stating that general’s Darius N. Couch and William F. Smith attacked the Army of Northern Virginia from the rear, as well as a combined assault by the Union army.  The notations for the song are as follows:

In the next and final part of the series, we’ll be looking at “songs of victory.”