When the Martians Visited Gettysburg

It was very soon after the Battle of Gettysburg when the recounting of battle events and experiences evolved to become battlefield legends, which flourished as the tourism industry in Adams County grew.  Most were quite sentimental- blue and gray calling an informal truce to share the water of Spangler’s Spring, the forgotten body of the Confederate sharpshooter at Devil’s Den, the message to Jennie Wade that was never delivered, and the like. These were good stories, published in battlefield guidebooks and souvenir pamphlets, or told again and again by battlefield guides, historians and other interested parties. Of course the more recent phenomena pertains to the numerous ghosts and spirits purported to be haunting both town and battlefield, shamelessly promoted through countless books, magazines, television programs and the numerous “ghost tour” companies who themselves seem to be haunting the streets of downtown Gettysburg.  Yet somewhere between the period of battlefield legends and the current ghost tour craze were the fairly complacent years after World War II when the only real threat to America was the great “Red Menace” and invaders from outer space. 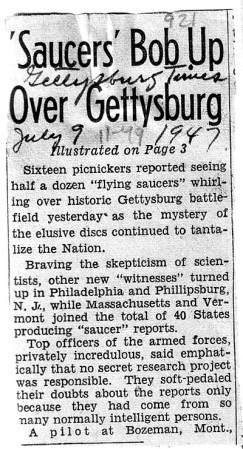 Outer space, you ask? We may look back on the 1940’s and 1950’s Science Fiction craze with a smile and a wink, but for many it was deadly serious! Even the small community of Gettysburg was not immune from invaders from outer space.

On July 8, 1947, a group of visitors were picnicking at the Pennsylvania Monument when they witnessed half a dozen silver objects fly over the battlefield and disappear in the east, not once but twice. Aghast at the site of these unknown objects slicing across the sky, the couples reported their experience that would be logged up as one of numerous suspicious sightings of “flying saucers” throughout the country that year, described as everything from saw blades to round, silver disks that made little or no noise as they whirled across the sky. Little did this group know at the time how this odd observation was only one incident of the tantalizing craze that would not only grip Adams County, but the nation as a whole- earth was being invaded. Was Gettysburg on the intergalactic list of places to visit?

Not since 1938, when Orson Welles’ infamous “War of the Worlds” broadcast gripped many Americans in fear of alien invaders, had America thought for one moment about the threat from beyond the cosmos. But here it was, flying over the Pennsylvania Monument in the broad daylight of a sunny July afternoon.

The post-World War II era saw an explosion of strange sightings, reports of flying saucers, and other bizarre events seemingly beyond reasonable explanation. It was the new science fiction, which extended itself beyond radio broadcasts and books to movie screens all across the country. There was something flying around up there and though no one had any idea of what it may be; “it” had finally made an appearance over Gettysburg National Military Park.

There never was a full explanation or official disclosure about the 1947 sighting over the park. It was simply chalked up as one of the numerous sightings of unidentified flying objects that flourished around the country over the ensuing decades and certainly those picnickers who were enjoying their afternoon in the park on that day in 1947 had no idea they would part of the national sensation of observing “Flying Saucers” and quite possibly the beginning of an alien invasion!

And barely four years later, Hollywood would produce the epic film, “The Day the Earth Stood Still” where a flying saucer landed on the national mall in Washington, DC. Isn’t it unfortunate the script writers did not see this story in the Gettysburg Times first and have Klaatu’s ship land on the lawn beside the Pennsylvania Monument? That’s probably for the best given the nation’s capital was a more pertinent choice in those early years of the Cold War.

Park employees will sometimes be questioned as to the existence of ghosts or spirits on the battlefield, but few have ever asked if any of us have seen or witnessed UFO’s coursing across the park sky. Hopefully the interest in that phenomenon faded a long time ago, along with drive-in movies and bell bottom jeans.

4 Responses to When the Martians Visited Gettysburg